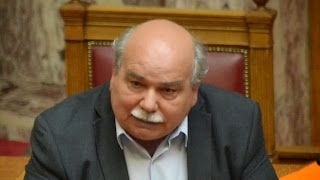 Greece has again threatened to default on loan repayments due to the International Monetary Fund, saying it will be unable to meet pension and wage bills in June and also reimburse €1.6bn owed to the IMF without a bailout deal with creditors.

“The money won’t be given . . . It isn’t there to be given,” Nikos Voutsis, the interior minister, told the Greek television station Mega. He claimed the EU and IMF were pressing Greece to make unacceptable concessions in the bailout talks in return for unlocking €7.2bn of aid frozen since last year.

Mr Tsipras had said Greece would miss a €750m payment in May. That payment was ultimately met, though only through tapping an emergency account held by the IMF. Athens in effect borrowed IMF assets to repay the Fund.

Predicting when Athens will run out of cash has proven a fraught affair for eurozone officials, who have been bracing for default since March.