How politics will seal the fate of Greece 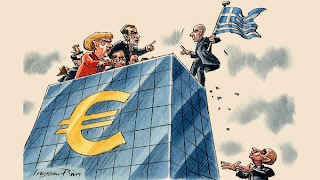 Forget debt ratios, fiscal balances, liquidity crunches and the rest. The EU and International Monetary Fund technicians negotiating with Athens are going through the motions. The Greek crisis was always as much about politics as economics. Now it is all about politics.

There are two theories of the Syriza government led by Alexis Tsipras. One presents a cast of bungling amateurs who have spent the past several months digging Greece into an ever deeper economic hole — all the while squandering the trust and goodwill of its eurozone partners. The other says the antics of Yanis Varoufakis, finance minister, are an elaborate political charade calculated to set Greece free from the shackles of merciless creditors.

The first hypothesis is the most popular. The preening and pirouetting, the interviews in glossy magazines, the undergraduate Marxism and love of the limelight — all point to a colossal failure on Mr Varoufakis’s part to grasp the depth of Greece’s plight or the sensitivities of its European partners. Along the way, tens of billions of dollars have drained from Greek banks as citizens stash their savings elsewhere.

The conspiracy theory, though, also has its adherents. They start with the assumption that no one could be quite as witless as Syriza has often seemed. Mr Tsipras’s government knew from the outset that it could not reconcile its domestic promises with Greece’s international obligations. The problem was that Greeks had voted at once for an end to austerity and to stay in the euro. A crisis had to be manufactured to show the government’s hand had been forced. By the Germans, of course.