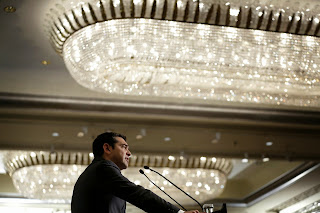 Greece’s prime minister, Alexis Tsipras, said in a speech on Friday that his government wanted a deal with the country’s creditors but that it would not enforce additional austerity measures, like further pension cuts.

Mr. Tsipras said Greece wanted a “unified agreement” that would restructure its huge debt, a thorny issue not on the agenda of the current talks.

Weeks of difficult negotiations have yielded some common ground, Mr. Tsipras told an audience of entrepreneurs and politicians at a conference in Athens sponsored by The Economist. Convergence on fiscal targets, “marginal changes” to value-added tax rates and an improvement to the tax collection system “make us optimistic that we are very close to an agreement,” he said.

But he said the two sides remained divided on the contentious issues of overhauling the labor sector and the pension system.

“I want to reassure the Greek people that there is no possibility or chance that the Greek government will back down on pension and labor issues,” he said, adding that additional pension cuts “cannot be accepted.”