Greek Pensions Said to Be in Creditor Crosshairs 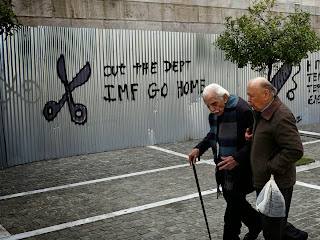 Greece’s creditors are making pension reforms a top priority, leaving the door open to compromises on other issues like the country’s minimum wage proposals.

Greek negotiators are meeting Wednesday with the so-called Brussels Group as efforts continue to reach a deal by month-end, according to two officials close to the talks.

If Prime Minister Alexis Tsipras can offer sufficient pledges to overhaul Greece’s retirement program -- one of the nation’s biggest hurdles to qualifying for International Monetary Fund aid -- creditors might offer leniency on their demands to restrict increases to the minimum wage, according to another official, who asked not to be identified because the talks are private.