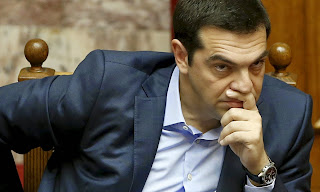 The epic struggle to keep Greece solvent and in the eurozone intensified on Saturday night amid signs of a looming crisis within the anti-austerity government that took Europe ablaze barely three months ago.

As prime minister Alexis Tsipras scrambles to secure a financial lifeline to keep the debt-stricken country afloat, hardliners in his radical left Syriza party have also ratcheted up the pressure. In a make-or-break week of debt repayments, the politician once seen as the harbinger of Europe’s anti-establishment movement has found himself where no other leader would want to be: caught between exasperated creditors abroad and enraged diehards at home.

With government coffers almost at nil and Athens facing a monumental €750m (£543m) loan instalment to the International Monetary Fund on Tuesday, it is the last act in a crisis with potentially cataclysmic effect. Either Tsipras betrays his own ideology to deter default – reneging on promises that got him into power – or he goes down as the man who allowed his country to do what no other EU member has done: enter the uncharted waters of euro exit. It is a moment of truth with consequences far beyond the borders of Greece.

“No doubt he is having nightmares about betraying ideas that he has held dear all his life,” said Aristides Hatzis, associate professor of law and economy at Athens University. “To make such a U-turn he is going to have to cross red lines that require a leap of faith I am not sure he has.”