Greece's True Deadline May be May 29

When does Greece finally run out of money? At what point will depositors have drawn so much cash out of the Greek financial system that its banks are essentially insolvent? And how long before Greece exhausts its bag of tricks, such as drawing down account balances at the International Monetary Fund to pay money owed to the International Monetary Fund? Here's a potential answer.

Greek banks have been increasingly reliant on emergency liquidity assistance from the European Central Bank since February. And because Greece's banks only have sufficient collateral to cover 95 billion euros ($106 billion) of ELA funding, extrapolating the growth in that reliance on a chart delivers a deadline -- May 29: 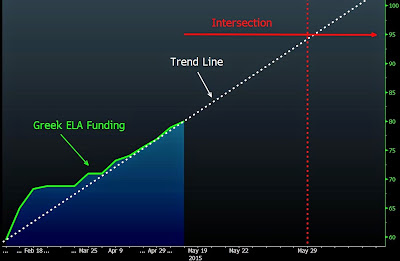 Of course, there's a huge caveat to this kind of extrapolation. The pace of Greece's appetite for ECB cash might decelerate, so the upper limit might not be reached so quickly. Or the ECB may decide it needs to be more generous in how it treats the collateral against which it's lending, which could raise the threshold. Or Greece's creditors might decide to release a portion of the funds the government in Athens is seeking, throwing it a lifeline in exchange for implementing at least some economic reforms.