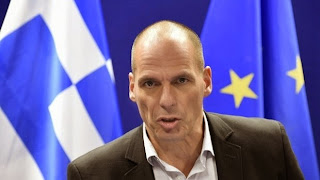 "I love deadlines; I like the whooshing sound they make as they go by," wrote Douglas Adams, author of the "Hitchhikers Guide to the Galaxy." He'd have found plenty to admire in Athens in the past few months, where the whooshing has become deafening. Greece's international creditors are probably less pleased by the sound -- although judging from the desperate method the country used to meet today's debt payment there may not be many deadlines left to miss.

Greece has to pay the International Monetary Fund about 750 million euros ($847 million) today. To avoid a default, the nation pulled out 650 million of reserves -- from its account at the IMF, according to Greece's Kathimerini newspaper. It's the equivalent of writing a check to yourself to clear your bank overdraft; and the deadline it sets for Greece may turn out to be the most serious one yet for the nation.

Greece has to replenish its IMF funds within a month, Kathimerini says. With the IMF already struggling with its own rules that forbid it from throwing good money after bad by lending to governments that aren't at least on a path to fiscal rectitude, Greece may have done nothing better than exchange one kind of default for another. The hackneyed phrase "kicking the can down the road" has never seemed more apt.