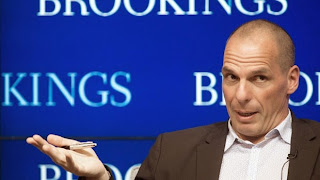 I have never met or spoken to Yanis Varoufakis, Greece's finance minister. Yet I feel I have gotten to know him through his writing and interviews, and by reading about his interactions with both the official and private sectors in Europe. That's why -- though I understand the rationale for the decision -- I was saddened last week when Prime Minister Alexis Tsipras sidelined Varoufakis from Greece’s complicated and consequential negotiations with its European creditors and the International Monetary Fund.

Varoufakis was a breath of fresh air in this protracted and exhausting Greek economic drama, which involves alarming human costs in terms of unemployment, poverty and lost opportunities. Backed by considerable economic logic and a desire to do better, he pressed for more realism in the policy conditions demanded by Greece’s creditors. And he never tired of reminding people that Greece's recovery wasn't that country's responsibility alone.

His approach to substance came with an unusual negotiating style – one that attracted quite a bit of attention but understandably proved unpalatable to his European partners.