Greece says it will default in June without aid from lenders 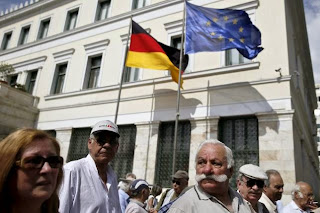 Greece will not be able to make a payment to the International Monetary Fund due on June 5 unless foreign lenders provide more aid, a senior ruling party lawmaker said on Wednesday, the latest warning from Athens that it is on the verge of default.

Prime Minister Alexis Tsipras's leftist government says it hopes to reach a cash-for-reforms deal in days, although European Union and IMF lenders are more pessimistic and say talks are moving too slowly for that.

Payments to the IMF totaling about 1.5 billion euros ($1.7 billion) fall due next month, starting with a 300 million euro payment on June 5.

"If there is no deal by then that will address the current funding problem, they won't get any money," he said.