Greece Saunters Across the Autobahn 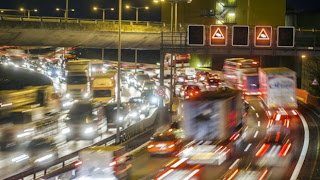 A few years ago, the Berkeley Police Department applied for and received a grant from the state of California to improve the behavior of local drivers. The grant came on the heels of data showing that Berkeley was perhaps the most dangerous city in the state in which to cross the street: The previous year more pedestrians had been struck by automobiles in Berkeley than in any of the 55 other comparably sized California cities.

But as anyone who lives here knows, the drivers aren't really the problem. Or rather, they aren't any more of a problem than they are any place else in California, and probably a lot less of one.

The Berkeley pedestrian, on the other hand, seems bent on his own destruction. In daylight hours you can find him sprinting from behind tall bushes into busy intersections, ear buds in place to ensure he remains oblivious to any danger; at night he dons dark clothing and slips, ninja-like, from shadows onto poorly lit streets. It's California law that a pedestrian, when he arrives at a crosswalk, must stop and make eye contact with any approaching driver: Hardly anyone here pays that law any attention. If the Berkeley pedestrian glances up at all, it's to glare at any driver moving slowly enough to notice his sudden, almost magical appearance in the middle of the road.