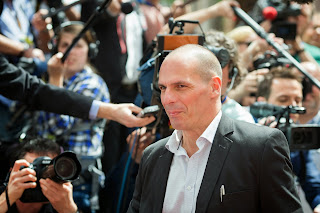 Greece handed the European Central Bank an excuse to maintain the life support for its financial system by persuading its skeptical German-led creditors it’s serious about delivering the policies needed to escape a default.

Less than three weeks after a Greek aid meeting broke up in taunts and acrimony, Finance Minister Yanis Varoufakis assured euro-area governments that his country is aiming to strike a bargain to win the final installments of its 240 billion-euro ($268 billion) aid program.

“We are making faster progress,” Dutch Finance Minister Jeroen Dijsselbloem told reporters in Brussels on Monday after leading a meeting of euro ministers. “I’m not satisfied but just a bit more optimistic.”

Pressure on the two sides had intensified with the ECB due to reassess the emergency liquidity lines keeping the Greek banking system in business on Wednesday. Although some central bankers are pushing for stricter terms, it’s now unlikely that policy makers will decide to restrict funding this week, according to two European officials.