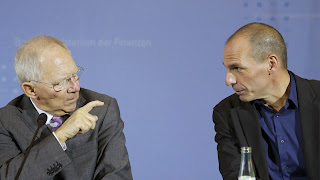 A referendum in Greece on the country’s international bailout program may be a good idea, Germany’s finance minister said Monday.

“It may even be a right measure to ask the Greek people to decide whether it’s ready to accept what is necessary or whether it wants the alternative,” said Wolfgang Schäuble said as he arrived for a meeting with his eurozone counterparts in Brussels.

Calling a referendum on the bailout would be a risky move for both the government in Athens and the rest of the eurozone, adding further unpredictability to a tense situation. A negative vote would likely herald Greece’s exit from the eurozone.

Several of the overhaul measures demanded by Greece’s international creditors—including pension cuts and new laws that make it easier to lay off workers—clash with the promises the new left-wing government made when it was elected in January.