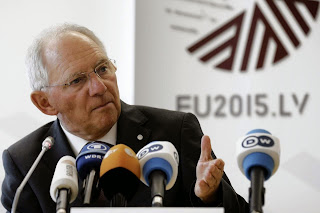 Germany’s finance minister said he couldn’t rule out a Greek default, a stance that will add pressure on Athens as negotiations over much-needed financing enter their final stretch.

Asked whether he would repeat an assurance he gave in late 2012 that Greece wouldn’t default, Wolfgang Schäuble told The Wall Street Journal and French daily Les Echos that “I would have to think very hard before repeating this in the current situation.”

“The sovereign, democratic decision of the Greek people has left us in a very different situation,” he said, referring to the January election that delivered a radical-left government that has vowed to reverse five years of creditor-mandated austerity and painful economic overhauls.