Five Years On, Doctor and Patient Split on Greek Cure 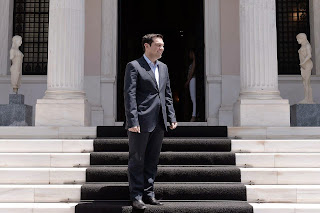 Greece and its creditors, deadlocked over fresh financing, agree on at least one thing about the country’s mammoth bailout, launched five years ago this month: It hasn’t worked as hoped.

But Athens and its lenders—the eurozone and the International Monetary Fund—disagree diametrically on why the bailout program has flopped. This dispute about the past five years helps explain why the players so often seem to be talking past each other today, and why reaching agreement on further aid is proving so hard.

Lenders, led by Germany, believe that the bailout’s blueprint was and remains correct, but that Greece failed to follow it. Rapid deficit-cutting was the only way to cure Greece’s debt problem. The rollback of stifling regulation and unaffordable social benefits and an injection of free-market competition were unavoidable if Greece was to grow sustainably.

German leaders such as Finance Minister Wolfgang Schäuble see Greece as the patient that didn’t take its pills, unlike others in the same hospital, such as Portugal and Ireland, who swallowed the same medicine and recovered. To many Greeks, however, the eurozone seems more like the psychiatric ward in the Ken Kesey novel One Flew Over the Cuckoo’s Nest, where a domineering “Big Nurse” controls the inmates through punishment and humiliation.