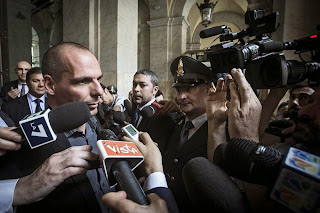 Economic plans and growth estimates distributed by Greek Finance Minister Yanis Varoufakis to some of his eurozone counterparts have baffled officials involved in the talks over its international bailout.

Officials say that the files differ greatly from what has been discussed at the technical level in Brussels in recent days and underline how Mr. Varoufakis continues to complicate progress toward a financing deal.

The 36-page document, entitled “Greece’s recovery: A blueprint” and seen by The Wall Street Journal, was presented by Mr. Varoufakis to his counterparts in Paris and Rome, as well as senior officials in Brussels, while he was touring European capitals over the past week, according to four European officials.

Mr. Varoufakis declined to comment on the document Friday in Madrid after meeting with Spanish Finance Minister Luis de Guindos.