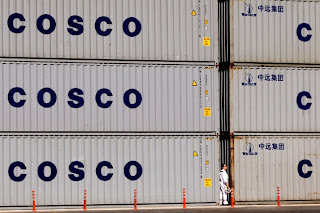 A key factor driving Greece’s devastating recession since 2010 has been the collapse of international investment. Multinational companies with holdings in the country put new projects on hold, and foreign direct investment — already low before the crisis — slowed to a trickle.

Among the few positive developments was a major investment from China Ocean Shipping Company, COSCO Pacific, in Piraeus, Greece’s largest port. In China’s quest to improve the efficiency of its supply chains into Europe and expand its presence in the global economy, it has spent the past few years rolling out its “One Belt, One Road” initiative. Piraeus has recently emerged as a focal point of this strategy — and in particular of China’s planned “21st Century Maritime Silk Road,” which aspires to link the country with Europe via the Indian Ocean and the Suez Canal.

In 2008, COSCO, China’s state-owned shipping giant, reached a €4.3 billion deal with the conservative government of Kostas Karamanlis giving the Chinese the right to operate the second terminal of the Piraeus Port Authority (PPA), as well to rebuild and operate an unused third terminal, for a period of 35 years. Since 2010, when COSCO began operating in Piraeus, it has quadrupled the number of shipping containers passing through Athens every year. Chinese investments in Piraeus may be one of the few things that can save Greece’s economy, but since the Syriza-led government took office in late January, such investment is danger of stalling.