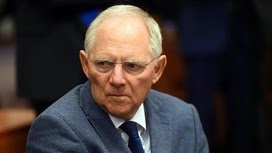 Germany’s finance minister virtually ruled out a deal next week that would release bailout funds to Athens, increasing the possibility that Greece could go bust as soon as May.

Wolfgang Schäuble’s comments were the first in public by a senior eurozone policy maker to dash hopes of an agreement at a meeting of finance ministers in Riga on April 24. But they echo sentiments made in private for several days by senior officials involved in the negotiations.

“Nobody expects that there will be a solution,” Mr Schäuble said of next week’s meeting.

Officials said technical talks between Greek authorities and the country’s bailout monitors on the ground in Athens, while more constructive than last month, have barely moved forward in the past week and raised questions as to whether a deal is likely even at next month’s eurogroup meeting.