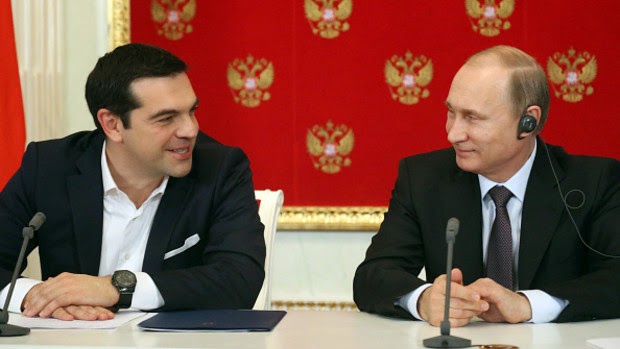 Greek Prime Minister Alexis Tsipras has returned from a journey to Moscow that he says wasn't about asking for financial aid and that Russian President Vladimir Putin says wasn't an attempt on his part to exploit Europe's divisions. Both claims should be taken with a Siberian-sized pinch of salt.

Tsipras's trip was a ploy for leverage in his effort to persuade the European Union and the International Monetary Fund to soften the terms of their loans to Greece. If the EU doesn't relent, Tsipras wanted to show, Greece can one day find other benefactors. And, by the way, as an EU member, it can veto the renewal of economic sanctions on Russia when these come up in July.

As much as Greek Finance Minister Yanis Varoufakis eloquently denied any such linkage in an interview Thursday with Bloomberg Television, the message was clear.

Putin, for his part, has a demonstrated interest in dividing Europe as he seeks to end its sanctions over the war in Ukraine. He's been working assiduously to persuade wavering countries such as Hungary, the Czech Republic, Bulgaria and now Greece that cooperating with Russia brings rewards, typically in the form of investments in energy infrastructure.