Spain and Portugal Can Cope With Grexit 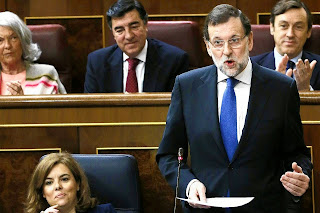 If anyone was going to blink over Greece, one might think it would be Spain or Portugal—the two countries widely considered most at risk if Greece leaves the eurozone. Indeed, both saw a slight rise in their borrowing costs last week at a particularly bleak moment in Greece’s negotiations with other eurozone members. And Goldman Sachs warned in an eye-catching report this week that if Greece does exit the euro, Spain’s borrowing costs could rise to four percentage points above Germany’s, compared with a spread of one percentage point now.

Greece has largely based its brinkmanship is based on an assumption that the eurozone will ultimately capitulate to its demands to prevent chaos spreading across the currency bloc.

Yet it is striking that Spain and Portugal aren’t clamoring for a eurozone capitulation but are among the hardest of hard-liners in demanding Greece respect the conditions of its loan agreements. This isn’t just a negotiating tactic. Publicly, Madrid and Lisbon say they hope Greece will remain in the eurozone, but senior figures in Madrid and Lisbon are privately clear that they believe it would be better for Greece to leave than to risk the chaos of tearing up eurozone rules.

Of course, this partly reflects domestic politics: Madrid and Lisbon are acutely aware that conceding too much to Athens would embolden their own radical leftist opposition. But it also reflects a growing confidence that the Spanish and Portuguese economies—thanks to their own efforts and those of the eurozone—are now resilient enough to withstand the shock.