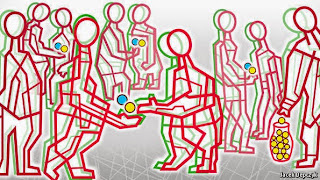 For the third time in five years, Greece is looking into the abyss. As in 2010 and 2012 the Hellenic Republic looks likely to run out of cash, and may soon miss scheduled debt repayments. But this time Syriza, Greece’s new ruling party, has alienated its creditors, making the previous solution (a co-ordinated default, coupled with a bail-out) harder to achieve. Yet a unilateral default might prompt the European Central Bank to withdraw its lifeline from Greece’s banks, leaving the country little choice but to abandon the euro—an outcome 84% of Greeks want to avoid. As Syriza scrabbles around for alternatives, a monetary trick sometimes used in such emergencies—issuing temporary IOUs, or “scrip”, in lieu of cash—is starting to look tempting.

Scrip can help governments conserve hard cash, something Greece certainly needs to do. It has debts of around €315 billion ($340 billion)—175% of GDP—and must make payments of €2.5 billion before the end of June. To find that cash it could start making some of its regular payments in paper IOUs, which can be used to pay taxes at a later date, rather than euros. The bulk of the Greek state’s annual outgoings of €80 billion is paid to its citizens—€22 billion in salaries, €35 billion in benefits. They would have little choice if the government decided to pay them in scrip instead of euros. If all government salaries had been paid in scrip last year, the country would have had a surplus of €27 billion euros, leaving plenty to pay back foreign creditors. Scrip itself would soon become a means of exchange.