Russia and Greece pledge to ‘restart and revive’ relations 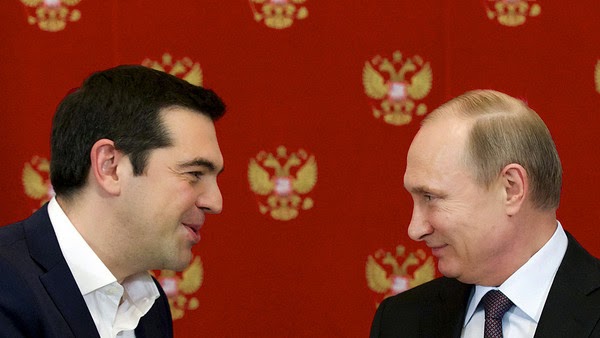 Russian president Vladimir Putin and Greek prime minister Alexis Tsipras have made a pledge to “restart and revive” bilateral relations in a meeting aimed at boosting each other’s political bargaining chips in their confrontations with the EU.

While Mr Tsipras trumpeted his country’s right to engage with Russia despite misgivings from other EU member countries while Moscow was locked in a stand-off with the west, Mr Putin dangled the prospect of Russian investment in cash-strapped Greece but said he had no intention of dividing the EU.

Mr Tsipras’s visit, just a day before Greece was due to make a €450m payment to the International Monetary Fund, and his criticism of EU sanctions against Russia, had triggered speculation that Moscow could help bail out Athens in exchange for support in blocking an extension of anti-Russian sanctions.

But while the Greek prime minister repeated his criticism of sanctions, he also appeared to reassure fellow EU members over fears that Greece could break ranks. He said that while Greece was seeking to build “relations of confidence and trust with the Russian Federation”, it remained an EU member and was “complying with all the commitments we have made to the EU”.