Not much has gone right for Greece since the Syriza-led government of Alexis Tsipras took power earlier this year. Mr Tsipras's promise to press Greece's European creditors for better bail-out terms rattled markets; both bank deposits in Greece and sovereign bond yields, which had been stable under the previous government, have moved in an ominous direction in recent months. Discussions with creditors continue, but each payment date looks a dangerous potential stumbling block. Greece's government is warning that if it cannot agree a new bail-out deal by the end of April it will miss payments amounting to €2.5 billion due to the International Monetary Fund in May and June. 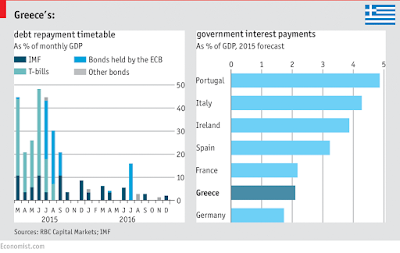 Posted by Yulie Foka-Kavalieraki at 12:05 PM