Rarely has a new government caused so much economic damage in such a short time. The rise of Greece’s radical left to power has aborted the Greek recovery, paralysed domestic investment and triggered capital flight of €50bn within 3 months, equivalent to almost 30% of Greek annual GDP.

Holger Schmieding, chief economist at Berenberg, sure knows how to start a client note.

He is scathing on the damage he sees brought to the Greek economy by the election of the Syriza government.

He used this chart to illustrate his point: the collapse in Greek corporate confidence coincides with the election of the Syriza government. 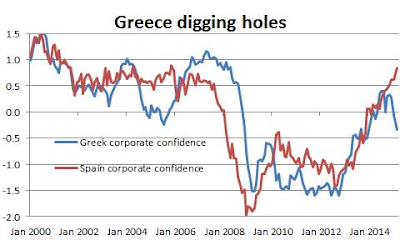 The answer to what Syriza needs to do immediately is easy, according to Schmieding. The country needs to: