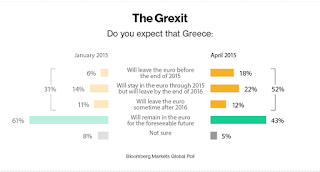 Greece, mired in a protracted financial crisis and at loggerheads with its bailout stewards, will leave the euro, according to the majority of investors, analysts, and traders in a Bloomberg survey.

Fifty-two percent of the respondents in the Bloomberg Markets Global Poll believe the cash-strapped country will leave the 19-nation bloc at some point, compared with 43 percent who see Greece remaining in the euro for the foreseeable future. In answer to the same question in mid-January, just 31 percent of poll respondents predicted a Greek exit and 61 percent had the country staying in.

The downbeat assessment of Greece’s prospects, more than five years after the country’s first bailout, comes as the country stands on the edge of a financial abyss. Prime Minister Alexis Tsipras has so far failed to squeeze a loan payment out of his country's institutional creditors as he sticks to his pledge to dial back austerity, while the nation’s banks stay on European Central Bank life support.

“The banking sector is Greece’s Achilles heel, and if the ECB decides to stop funding, then the situation will be even more fragile than it is at the moment,” said Diego Iscaro, a senior economist at research company IHS Global Insight in London. “That could trigger an exit—eventually.”