Let Greece Stumble Out of the Euro 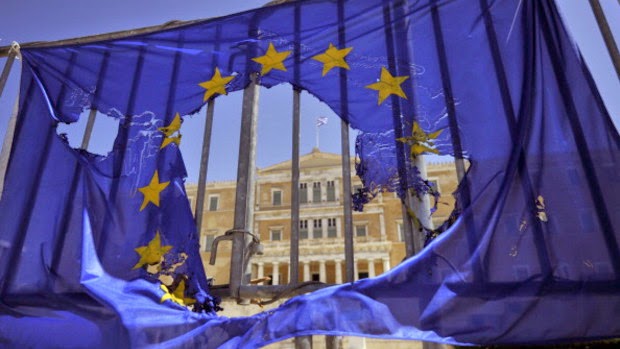 As the weeks since the Greek election have rolled into months, the government elected in January seems no closer to resolving the dichotomy between its anti-austerity inclinations and the reforms its creditors demand as the cost of handing over more money. Today's news that the government has seized the cash of the nation's local governments, citing "extremely urgent and unforeseen needs," suggests the money really is running out. And none of the likely scenarios for what happens next seems compatible with Greece staying in the euro.

The hard-to-admit truth is that Greece seems both unwilling and unable to pay the dues that accompany euro membership. By ceding control of its currency, the country has ruled out devaluation as an option to pull its economy out of its tailspin; some clever people are starting to say Greece might be better off on its own.

It's worth recalling how Greece got behind the velvet rope of the euro club in the first place -- by cheating. The country couldn't clear the 3 percent deficit-to-gross-domestic-product ratio to qualify for membership; so it hired Goldman Sachs to do some fancy financial engineering in the derivatives market to manufacture the right number by 1999.