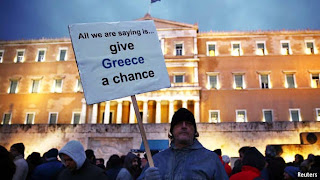 Contrarian investors love terrifying headlines. The more unloved the country, the more undervalued its assets and the more money to be made as its fortunes turn. Moneymen who shrewdly exploited the on-again-off-again panic regarding Greece’s finances have made handsome profits in recent years. In the second half of 2012, for instance, holders of Greek government bonds doubled their money. In the second half of 2013 the main stockmarket index rose by almost 40%. It is striking, therefore, how hard it is these days to find financiers willing to make any bets on Greece at all.

The country is once again running out of money. On April 24th euro-zone finance ministers are due to meet in Latvia to decide whether to provide a lifeline by disbursing the last instalment of the existing bail-out package. The problem is that Greece’s new government has refused to implement reforms promised by its predecessor, and has not proposed alternatives its creditors consider adequate. Talks continue, but the two sides remain far apart. If Greece does not secure more cash, it will soon have to default either on its own citizens (see Free exchange) or on the IMF and the European Central Bank (ECB). That, in turn, could prompt the ECB to withhold support for Greek banks, forcing Greece to impose capital controls and perhaps to withdraw from the euro.

All manner of financial indicators suggest disaster is imminent. The Greek government’s three-year bonds now yield a dizzying 27%. Ten-year government bonds are trading at their highest yields (and therefore lowest prices) since 2012 (see chart). Credit-default swaps, which offer insurance against a default, suggest an 80% chance of one within five years. Listed Greek firms are trading at less than 60% of their book value, on average. Greek bank stocks are down by 75% compared to this time last year. 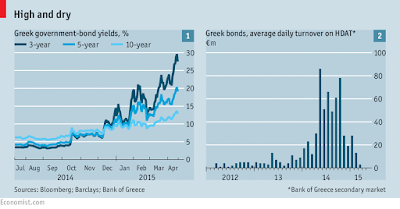 Posted by Yulie Foka-Kavalieraki at 4:57 PM