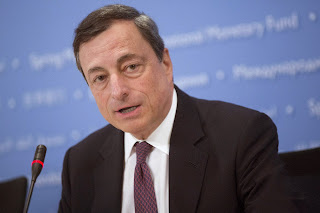 The European Central Bank raised the amount of emergency liquidity available to Greek banks, while signaling that access to such funds may become more difficult if bailout talks remain deadlocked.

The Governing Council lifted the cap on Emergency Liquidity Assistance by 1.4 billion euros ($1.5 billion) to 76.9 billion euros on Wednesday, people familiar with the decision said. That follows an increase of about 1.5 billion euros last week. An ECB spokesman declined to comment.

With no speedy deal between Greece and its creditors in sight, the ECB is studying measures to rein in ELA funding to limit risks. Staff have proposed increasing the discounts imposed on the securities banks post as collateral when borrowing, and the Governing Council may discuss the issue at its May 6 meeting.

“When the Eurosystem as a whole gives such support, we have our own collateral rules, we can set them ourselves,” ECB Governing Council member Ardo Hansson told reporters in Tallinn, Estonia. “When it’s ELA, then that’s given by the national central bank, which has some latitude in this matter.”