Greece’s poor are back to where they were in 1980

In the last seven years, Greece's economic collapse has wiped out all the progress its poor had made in the 28 years before that.

Now there are a lot of ways to think about how historic Greece's recession has been. Its economy has fallen about as much as the U.S.'s did during the Great Depression. Its unemployment rate peaked at 28 percent. And, as Derek Thompson points out, its cities have become filled with smog during the winters, because its people can't afford to heat their homes any other way than burning whatever they can get their hands on. But think about this last one. It probably gets us the closest to having a real idea what it's been like to live through Greece's slump.

Well, other than the chart above. It shows how much money Greek people from the richest to the poorest 10 percent have had after accounting for taxes and inflation the past 40 years. The simple story, as you can see, is that there was a big jump for everybody after the junta was pushed out in 1974, a big stagnation from the mid-80s to the mid-90s, an even bigger jump, especially for the rich, after that, and then a big crash that's erased 30 years of gains—or more. Greece's rich have done a little better than the rest, with their real disposable incomes "only" falling to 1985 levels. But its poor have fallen even further, all the way back to where they were in 1980. 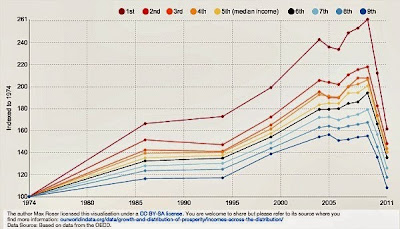 Posted by Yulie Foka-Kavalieraki at 8:42 PM