Greece’s Far Left Against the World 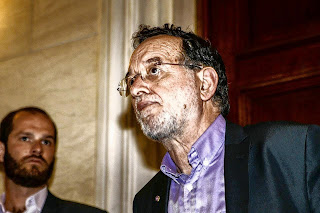 In a recent interview with an Athens newspaper, Greece’s minister of energy and development, Panagiotis Lafazanis, declared that Greece faces a life-or-death struggle against “neocolonial foreign centers.”

“We cannot have an agreement with the neocolonial centers that dominate the EU and the IMF,” he said, “if Greece is not able to really threaten their basic economic political and geostrategic interests.”

Such rhetoric is far from unusual in Greece these days, and its growing influence helps explain why the country is struggling to get a grip on its economic problems. From its very first day in power, the far-left Syriza party government of Prime Minister Alexis Tsipras has tried consistently to frame the political debate in Greece not as a conflict between differing worldviews or economic philosophies, but as a conflict between “foreign centers” and the “motherland” (patrida).

In this view, negotiations with creditors—especially Germany—aren’t about economic reforms, Greece’s ability to repay or the like. Rather, the bailouts are an attempt to exploit Greece for nefarious ends. In a recently published book called “Colonies of Debt,” Foreign Minister Nikos Kotzias purports to reveal a satanic plan by Germany aiming to subjugate Greece. This plan, according to Mr. Kotzias, involves turning Greece into a “colony of debt” so that the Germans can acquire Greece’s wealth. “Just like under the Nazi Occupation,” he writes, “Germany aims to control the mineral wealth of the country.”