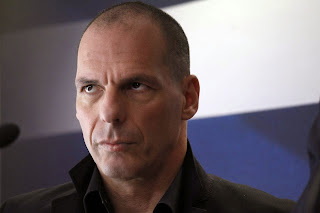 There’s new optimism over the prospects for a Greek debt deal after Athens on Monday nudged Finance Minister Yanis Varoufakis to the sidelines in negotiations with creditors. Based on the 4.4% rise in Athens’s stock market and the fall in bond yields to 11.9% from 12.6% that followed, investors hope a less confrontational approach will pave the way for a deal. But Mr. Varoufakis isn’t investors’ or creditors’ biggest problem. Greek voters are.

Deputy Foreign Minister Euclid Tsakalotos will now lead the team negotiating with other eurozone governments and the International Monetary Fund over Greece’s current bailout program. He is politically and ideologically close to far-left Prime Minister Alexis Tsipras, but he is expected to bring a less abrasive demeanor to the talks. He’d struggle to be any more disliked by Greece’s partners than Mr. Varoufakis, who in a Twitter post on Sunday compared himself to Franklin D. Roosevelt after skipping a dinner with other finance ministers Friday evening.

But there’s no way around the fact that voters in January elected a government led by the radical Syriza party with a mandate to tear up Greece’s old deal with creditors. Despite their many flaws, the bailout programs of 2010 and 2012 guided Greece back to modest economic growth, and Athens was able to issue bonds to private investors for the first time since the crisis began. Yet Syriza won a mandate for its pledge to secure creditors’ permission to return to the old tax-and-spend-and-spend norm while still receiving bailout cash.