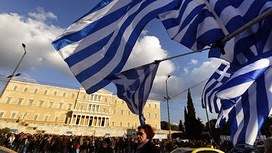 Greece on Wednesday submitted a fresh list of economic reforms to eurozone authorities, estimating the measures could raise as much as €6bn this year. It is the cash-strapped government’s most comprehensive effort so far to unlock €7.2bn in bailout funds before it goes bankrupt.

The 26-page document, obtained by the Financial Times, relies on plans to crack down on tax evasion and fraud to raise most of the revenues. These include €875m from audits of offshore bank transfers and €600m from a new lottery scheme aimed at compelling consumers to demand value added tax receipts.

The tenor of talks between Athens and its international bailout inspectors — the European Commission, European Central Bank and International Monetary Fund — has improved in recent days, and Greek officials have expressed hope that they could reach an agreement on the measures as soon as next week.

“The larger purpose of this document is, in the first instance, to unlock short-term financing that will permit the Greek government to meet its immediate obligations,” the document states in a short introduction. “The Hellenic Republic considers itself to be a proud and indefeasible member of the European Union and an irrevocable member of the eurozone.”