Greece struggles to make payments to more than 2m pensioners 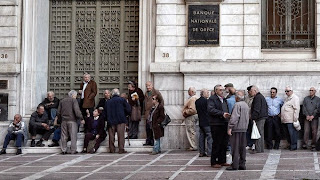 The Greek government was struggling on Thursday to complete payments to more than 2m pensioners after claiming that a “technical hitch” had delayed an earlier disbursement.

Elderly Athenians waited at branches of the National Bank of Greece, the state-controlled lender handling the bulk of pension payments, which are staggered over several days.

“Normally I only withdraw half the money at the end of the month, but today I’m taking it all,” said Sotiria Zlatini, 75, a former civil servant. “There are so many rumours going round because of the government’s problems and what happened two days ago.”

The leftwing Syriza-led government scrambled to pay pensions and public sector salaries in February and March after failing to reach agreement with international lenders on unlocking €7.2bn of bailout aid.