Greece reassures on €450m payment due to IMF 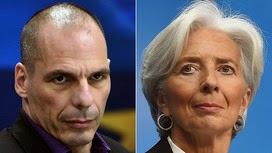 Greece has assured the International Monetary Fund that it will not miss a €450m payment to the fund due on Thursday, easing fears that Athens was set to become the first developed country in the IMF’s history to default on its debts to the institution.

Yanis Varoufakis, the Greek finance minister, on Sunday met for more than two hours with Christine Lagarde, the IMF’s managing director, after flying in for what was billed by the fund as an “informal meeting”. He is due to meet senior US officials on Monday.

In a statement issued after their meeting, Ms Lagarde said Mr Varoufakis had confirmed that Athens would make the next payment due on April 9 as part of the plan agreed by a previous government to repay the IMF for Greece’s first bailout in 2010.

Greece this year is due to repay the IMF more than €9bn as part of a repayment plan that fund officials insist cannot be rescheduled unless Athens agrees to a fresh IMF programme, something the new government does not want to do.

More
Posted by Aristides N. Hatzis at 8:18 AM