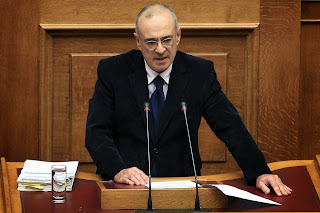 Greece’s government issued a decree Monday requiring public bodies such as state-owned companies and public pension funds to transfer their cash reserves to the central bank as the country’s cash reserves continue to dry up.

The decree, published in the government gazette late Monday, came as no surprise, the government having telegraphed the move last week. But it still represents evidence of an escalating cash squeeze amid renewed concerns of Greek default.

Greece’s parliament has recently passed a bill allowing the Greek government to borrow funds held by state bodies and social-security funds via repurchase agreements, or repos, and has borrowed money from entities such as the central bank and the country’s job centers.

But this decree makes the transfer of state bodies’ cash reserves to the Bank of Greece compulsory, excluding the country’s social-security funds.

“This practice already exists in several countries of the European Union,” a senior government official said Monday, adding that the state has the ability to borrow cash from state bodies that don’t have an immediate need for it, but for no more than 15 days.