Greece Is Stuck With the Euro, and Vice Versa 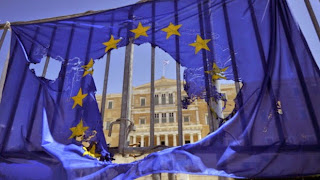 Sometimes a country becomes so overridden by debt that it actually makes sense for it to default, abandon its currency and start over. Greece is not one of those countries.

That hasn't stopped a number of economists from arguing otherwise, however, and Prime Minister Alexis Tsipras's statement that he may call a referendum on any deal with creditors suggests Greeks might soon be asked to make a choice. If they are, they should trust their instincts (insofar as they can be measured by opinion polls) and stick with the euro.

It isn't that default or leaving a currency union is unthinkable. Far from it: The Hellenic peninsula was home to the first recorded default in the fourth century B.C., and modern Greece has reneged on its debts four times since gaining independence in 1829. Worldwide, more than 70 countries have exited currency unions and pegs since 1945, not all of them painfully.

The argument for Greece to go it alone has always been superficially attractive. For one thing, it should never have joined the euro in the first place, because it couldn't meet the European Union's debt-limit requirements. And the standard way for overextended countries to reboot their economies is to devalue their currencies, increase their exports and start growing again. So long as it's in the euro zone, Greece can't do this.