Greece Is Running Out of Money, and Time 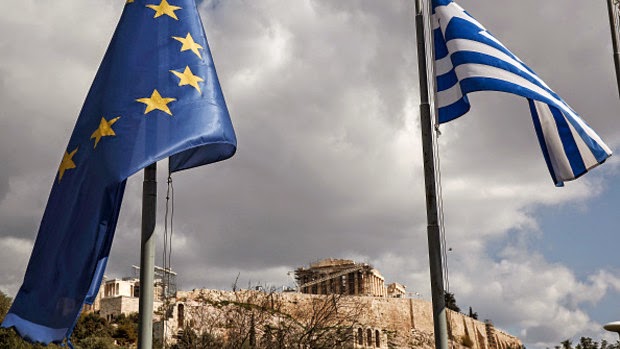 Greece, as everyone knows, is running out of money. That means it might not be able to pay its debts, including what it owes the International Monetary Fund, which should be a cause for serious anxiety in Europe. But there's a dangerous myth starting to gain traction that the nation could default on its obligations but still remain a member of the euro.

On Monday, the Financial Times said Greece is poised to default on 2.5 billion euros of payments owed to the IMF in May and June if it doesn't get additional bailout cash. The newspaper cited "people briefed on the radical leftist government's thinking." Germany is making contingency plans that would let Greece stay in the euro even if it defaults on its debts, the Die Zeit newspaper reported today, without citing its sources.

Figures released today show Greece's budget surplus was just 0.4 percent of gross domestic product last year, well short of the 1.5 percent it had promised as part of its bailout terms. The Greek government has said it needs funds by April 24, when euro-region finance ministers are scheduled to next meet; but Friederike von Tiesenhausen, a spokeswoman for the German finance ministry, told reporters today that "no one in the euro group expects that this could be completed by April 24." No wonder Peter Kazimir, the Slovakian finance minister, said today that Greece is moving "closer to the abyss. Nothing can be excluded."