Greece: Down and Probably Out

Led by the charismatic Alexis Tsipras, the Syriza party took office in Athens on January 26th. The most prominent member of the new Prime Minister’s cabinet is Yanis Varoufakis, the Finance Minister. He is an economics professor, with a complete repertoire of anti-capitalist rhetoric. And with government spending amounting to 58.5% of Greek GDP, Varoufakis’ hot anti-austerity harangues have turned the meaning of the word “austerity” on its head. After three months in office, the Syriza coalition has accomplished virtually nothing. There have been no commitments — credible or not — to do anything.

As Greece’s economic drama (read: crisis) moves towards its final stage, people are anxious to see how it will end. “I looked up the answers in the history books,” writes John Dizard in the Financial Times, “it works better than trying to get inside information from the cabinet, since there is no information on the inside.”

It turns out that this is not the first time Greece has been in financial hot water. Indeed, that Balkan country has been a serial deadbeat. Following its recognition as a state in 1832, Greece spent most of the remainder of the 19th century under the control of creditors. The pattern started with a default in 1832. In consequence, Greece’s finances were put under French administration. Following Greece’s defeat at the hands of Turkey in 1897, Greece’s fiscal house was entrusted to a Control Commission. During the 20th century, the drachma was one of the world’s worst currencies. It recorded the world’s sixth highest hyperinflation. In October 1944, Greece’s monthly inflation rate hit 13,800%. 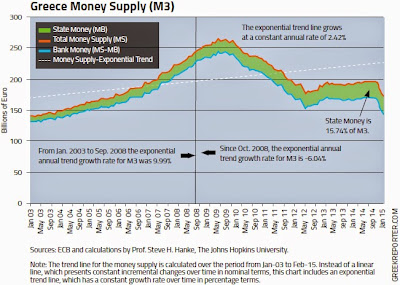 Posted by Yulie Foka-Kavalieraki at 10:27 PM