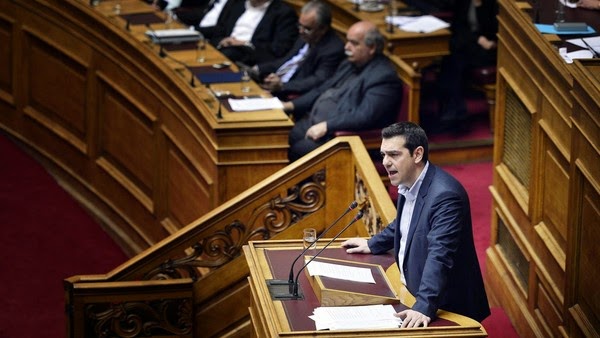 Below the walls of the Greek parliament, on the spacious, sloping square of Syntagma in central Athens, the most unusual public protest of the Syriza era took place on Thursday.

When it is not lecturing European countries on their mishandling of the euro crisis — a crisis that, as every day passes, is bringing Greece closer to a debt default — the nation’s ruling radical leftist party likes to portray itself as the champion of the proletariat and the defender of the oppressed on home soil.

But Thursday’s protest told a different story. Waving flags and dressed in hard hats and luminous yellow jackets, a couple of thousand demonstrators from northern Greece — gold mine workers, accompanied by families and friends — spread out across Syntagma.

After a 14-hour bus journey they had arrived in Athens to demonstrate against the government’s suspension of one of the Canadian-owned mine’s operating licences. The miners suspect that the measure, ostensibly adopted on environmental grounds, is politically motivated and will cost them their jobs. “We think it’s unfair and illegal,” says Dimitris Ballas, a geologist at the mine.

The rally was the first sizeable anti-government protest since Syriza swept to electoral victory on January 25. It indicated that Greeks, if they feel mistreated or misgoverned, will turn against the political upstarts of Syriza just as they turned against the traditional parties of left and right whose misrule pushed Greece to the abyss.