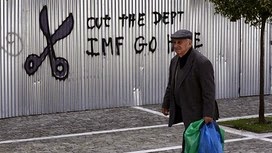 Eurozone authorities’ frustration with Greece has grown so intense that a change in the current Athens government’s make-up, however far-fetched, has become a frequent topic of conversation on the sidelines of bailout talks.

Many officials — up to and including some eurozone finance ministers — have suggested privately that only a decision by Alexis Tsipras, Greek prime minister, to jettison the far left of his governing Syriza party can make a bailout agreement possible.

The idea would be for Mr Tsipras to forge a new coalition with Greece’s traditional centre-left party, the beleaguered Pasok, and To Potami (The River), a new centre-left party that fought its first general election in January.

“Tsipras has to decide whether he wants to be prime minister or the leader of Syriza,” said one European official.

A senior official in a eurozone finance ministry added: “This government cannot survive.”

Members of Syriza’s moderate wing admit there is a problem with the Left Platform, the official internal opposition that represents about a third of the party and controls enough MPs to bring down the government if it were to rebel in a parliamentary vote.