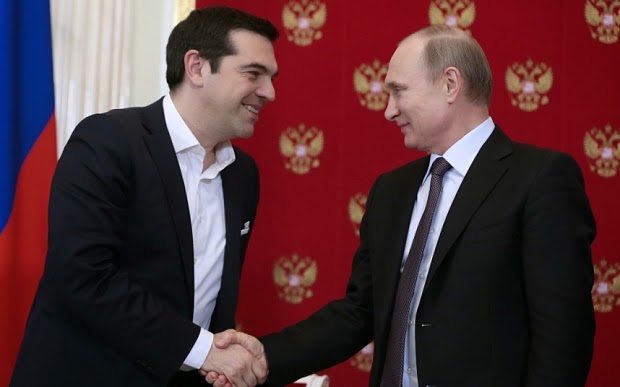 The European Union has presented Vladimir Putin with an irresistible strategic prize, on a platter.

By insisting rigidly that Greece's radical-Left government repudiate its electoral pledges and submit to ritual fealty - even on demands of little economic merit, or that might be unwise in the particular anthropology of a post-Ottoman society - it has pushed the Greek premier into the arms of a revanchist Kremlin.

The visit of Alexis Tsipras to Moscow has been a festival of fraternity. On Wednesday he laid a wreath at the Tomb of the Unknown Soldier and spoke of the joint struggle against Fascism, and the unstated foe. The squalid subject of money was of course avoided. "Greece is not a beggar," he said.

"The visit could not have come at a better time,” said Mr Putin, purring like the cat who ate the cream.

More
Posted by Yulie Foka-Kavalieraki at 12:01 AM