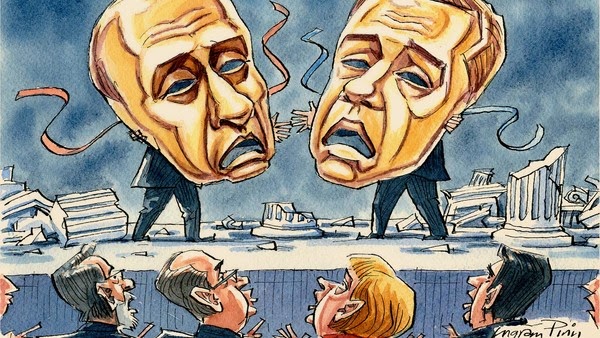 The pilgrimage of Greek prime minister Alexis Tsipras to Moscow told a tale of two tragedies. One, perilously close to the denouement, is about Greece’s uncertain place in the family of European nations; the other, still unfolding but with a storyline that foretells a calamitous final act, is about the future not just of the euro but of European integration.

Predictably enough, the Greek prime minister was feted by Vladimir Putin. The Russian president’s revanchist aggression in Ukraine has left his regime more vulnerable than anyone in the Kremlin would dare admit. Mr Putin badly needs to weaken the EU sanctions regime. Shared Orthodox Christianity, an air of leftist nostalgia in Athens and, above all, Greece’s desperate isolation make it an ideal target for Moscow’s strategy of divide and rule.

It is harder to see what Mr Tsipras gains beyond a few warm words to cheer his supporters at home. The promise of a gas pipeline years hence? Any aid on offer from Moscow would be minuscule relative to funds from the EU and the International Monetary Fund. There is nothing Mr Putin could do that would make leaving the euro any less painful.

The other day I heard Yanis Varoufakis explain how Greece had ended up here. The finance minister’s is a story fluently told — of US backing for the colonels, of the havoc wreaked on industry by the free trade rules of the EU, of the Brussels funding that bankrolled clientelist politics in Athens and of how cheap euros created a ruinous bubble.