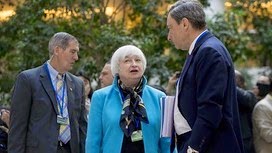 Mario Draghi said the euro area was better equipped than it had been in the past to deal with a new Greek crisis but warned of “uncharted waters” if the situation were to deteriorate badly.

Asked about the risks of contagion from a new flare-up in Greece, he said: “we have enough instruments at this point in time . . . which although they have been designed for other purposes would certainly be used at a crisis time if needed.”

The two tools he referred to were the ECB’s so-called outright monetary transactions, which have never been used, and Quantitative Easing, which the ECB launched in January. He added: “we are better equipped than we were in 2012, 2011 and 2010.”

However Mr Draghi added: “Having said that, we are certainly entering into uncharted waters if the crisis were to precipitate, and it is very premature to make any speculation about it.”