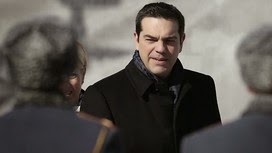 Seen from the capital cities of Greece’s eurozone partners, there is one obvious way for Alexis Tsipras, the leftwing prime minister, to prevent the disaster of a debt default and exit from Europe’s 19-nation monetary union.

It boils down to the happy thought that, with Greece running out of cash to pay salaries and pensions, he should bow to realities and govern as a rightwinger or, at least, as much less of a leftist.

He should negotiate in good faith with Greece’s creditors, waste no more time on bombastic anti-capitalist gestures, make credible promises of economic reform and budgetary discipline and, last but not least, implement these promises.

If necessary, so this argument continues, Mr Tsipras should break with ultra-leftists in his ruling Syriza party who are opposed to such concessions, and who account for a good 20 per cent of the party’s parliamentary representation. Instead, he should govern in a sort of pro-EU national unity front with the moderate parties he defeated in January’s election.