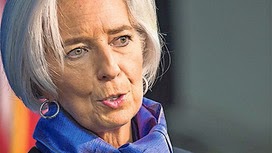 Christine Lagarde, head of the International Monetary Fund, dashed Greece’s hopes of grace periods for loans it is due to repay next month, saying precedents were “not followed by very productive results”.

Greek bond yields soared on Thursday after the Financial Times revealed the news of the IMF’s stance. Returns on the July 2017 bond rose 202 basis points to 26.2 per cent, the highest since the country’s restructuring. Its 10-year bond yields climbed 70 basis points to 12.4 per cent.

The revelation that Greece had explored the possibility of a grace period highlighted the parlous state of its public finances and international uncertainty about whether it will default on a €747m payment to the fund, due on May 12.

Speaking at the IMF’s spring meetings in Washington, Ms Lagarde confirmed that she explained the fund’s policy of refusing requests for a delay to Yanis Varoufakis, the Greek finance minister, after Athens made an informal approach this month for more time to pay. Mr Varoufakis has denied that he made such a request.

More
Posted by Yulie Foka-Kavalieraki at 12:52 AM