The 15 Most Miserable Economies in the World

Inflation is a disease that can wreck a society, Milton Friedman, the late Nobel laureate economist, once said. Add rising unemployment to the diagnosis, and his profession ascribes a rather non-technical term to the debilitating effect on people: misery.

That affliction this year will be most acute in Venezuela, Argentina, South Africa, Ukraine and Greece — the five most painful economies in which to live and work, according to Bloomberg survey data that make up the so-called misery index for 2015. (It's a simple equation: unemployment rate + change in the consumer price index = misery.)

In Ukraine's case, war will exact greater economic casualties. Tension with Russia-backed rebels will prolong joblessness in the eastern-European nation, and inflation won't offer much relief, the surveys showed. The one-two punch means Ukrainian consumers are set to be the fourth-saddest among 51 economies (including the euro area) based on forecasts for the misery measure. 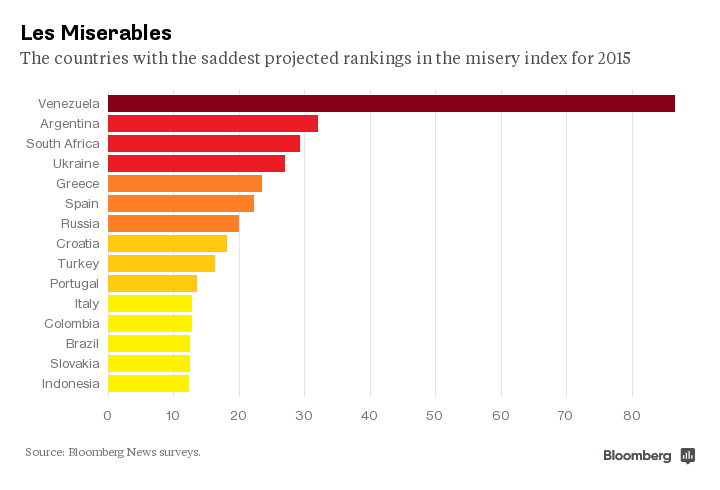 Posted by Yulie Foka-Kavalieraki at 8:10 PM