No cash for Athens until reforms in place, says Spain 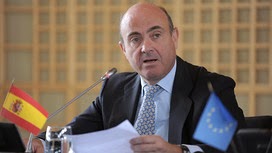 Greece’s cash-starved government will not receive any money from the eurozone rescue fund until all its proposed reforms have been implemented, the Spanish economy minister has said.

“We will see whether the list of reforms is comprehensive enough or not. [But] there will not be any disbursement before there is a real test that the reforms have been approved and implemented. That is the approach,” Luis de Guindos said in an interview with the Financial Times, dashing Greek hopes that the presentation of a new reform list alone could unlock fresh funds for Athens.

Madrid has taken a particularly hardline stance on Greece’s radical anti-austerity push, but patience is running thin in other eurozone capitals, not least Berlin where Chancellor Angela Merkel will meet Greek premier Alexis Tsipras on Monday.

“We have been losing time, and the communications from the Greek side have not been brilliant. They have not made a lot of friends,” Mr de Guindos said, adding that European governments were united in their stance on Greece: “There is no sign of divisions — not at all. And that is despite the fact that the Greeks have tried to exploit potential divergences. But those divergences don’t exist.”

The minister, who is one of the frontrunners to take over the presidency of the eurogroup of eurozone finance ministers this year, said Greece should push through a “real privatisation program” and refrain from “unilateral measures” such as last week’s anti-poverty law.