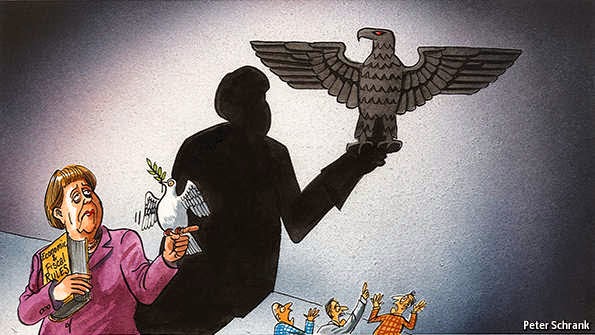 The timing was certainly awkward. Talks between Greece and the euro zone were on a knife-edge. Beset by rumours that Greece was running out of money, Alexis Tsipras, the prime minister, had agreed to propose reforms to unlock bail-out funds. Then, just before Mr Tsipras was to visit Angela Merkel, Germany’s chancellor, a news magazine ran a cover of Mrs Merkel overlaid on an image of occupying Nazi forces at the Parthenon. “The German Übermacht (‘Dominance’)”, read the headline.

Insinuations that Germany’s tough line on debtor countries carries a whiff of the Third Reich have been common throughout the euro crisis, usually in Greece. But this time it was Der Spiegel, a respected German weekly, that made the comparison (depicting European perceptions, it insists). At a press conference with Mrs Merkel, Mr Tsipras condemned the cover (before repeating his call for war reparations). But as Greece again throws the euro zone into turmoil, Germany is facing awkward questions.

During the euro crisis, power shifted from European institutions to capitals, Berlin chief among them. On the urgent question of foreign policy, French weakness and British drift have shrunk Europe’s “big three” to one-and-a-half—if you are feeling generous towards France. In contrast to the apocryphal story of Henry Kissinger wondering what number one calls to speak to Europe, Barack Obama knows exactly whom to consult on Europe’s Russia policy—and she does not sit in Brussels.

German dominance is in part a consequence of others’ retreat. That may be why complaints have been muted. “If the Italians don’t bring pasta and the French don’t bring pâté,” says a diplomat, “you can’t complain about Mrs Merkel’s cabbage soup.” Meanwhile, outside Greece, the worst of the budget-cutting that bred European resentment of Germany is over. The recent solid economic performance of most bailed-out countries has strengthened Germans’ conviction that they were right all along.