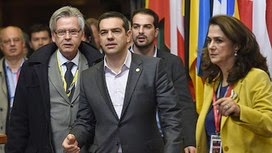 Greece’s prime minister agreed to speed up his economic reform plans but failed to secure any short-term financing for his cash-strapped government at a meeting with German and French counterparts and EU leaders late on the sidelines of a summit in Brussels.

The agreement with Alexis Tsipras did not change the terms of a deal reached a month ago with eurozone finance ministers, which has floundered amid Greek objections to detailed talks with bailout monitors in Athens.

Nor did it bring Athens any closer to securing some of the €7.2bn remaining in the bailout, despite mounting evidence it is running so low on funds that it has had to scrape together cash from the bank accounts of independent government agencies.

But EU leaders said they hoped the three-hour discussion at the highest level would provide the needed spark for Greek authorities to co-operate more fully with the fact-finding team in Athens, which must sign off on a final list of reforms that Mr Tsipras vowed to present in a matter of days. Only when the list is agreed and the reforms implemented will bailout cash be released.