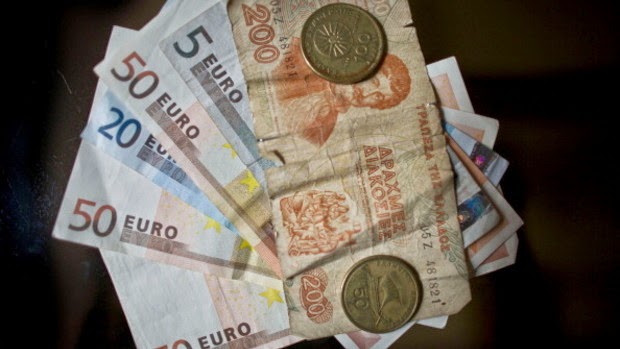 Greece's money troubles resemble a game of pass the parcel, where each successive participant rips another sheet of wrapping paper off the box -- which turns out to be empty when the final recipient reaches the core. With time and money running out, a successful endgame seems even less likely than it did a week or a month ago. It's increasingly obvious that the government's election promises are incompatible with the economic demands of its euro partners. Something's got to give.

The current money-go-round is unsustainable. Euro-region taxpayers fund their governments, which in turn bankroll the European Central Bank. Cash from the ECB's Emergency Liquidity Scheme flows to the Greek banks; they buy treasury bills from their government, which uses the proceeds to … repay its International Monetary Fund debts! No wonder a recent poll by German broadcaster ZDF shows 52 percent of Germans say they want Greece out of the euro, up from 41 percent last month.

There's blame on both sides for the current impasse. Euro-area leaders should be giving Greece breathing space to get its economic act together. But the Greek leadership has been cavalier in its treatment of its creditors. It's been amateurish in expecting that a vague promise to collect more taxes would win over Germany and its allies. And it's been unrealistic in expecting the ECB to plug a funding gap in the absence of a political agreement for getting back to solvency.

More
Posted by Yulie Foka-Kavalieraki at 10:05 AM