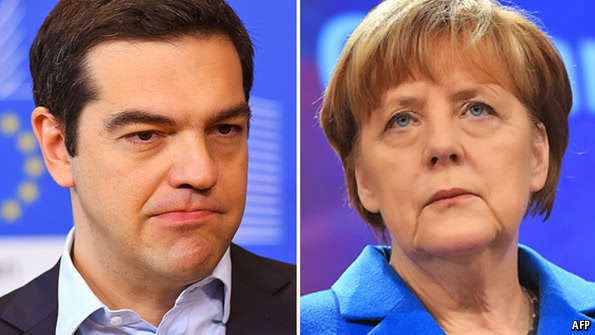 The Greek crisis is not just an economic mess. Increasingly, it is becoming a geopolitical mess too. Alexis Tsipras, the country’s prime minister, whose radical-left Syriza party swept into government after January’s general election, has taken to tugging at crude political levers—from cosying up to Vladimir Putin to demanding war reparations from Germany—in the belief that this will somehow prompt concessions from the rest of the euro zone.

The whiff of blackmail has incensed Europe’s politicians. Mr Tsipras has a chance to calm things down in two meetings with Angela Merkel, Germany’s chancellor—the first this week on the fringes of a European summit in Brussels, and the second in Berlin on March 23rd for what should be some hard talking between the European Union’s most powerful leader and its biggest troublemaker. Instead of stirring up resentment, Mr Tsipras should focus on the urgent task at hand: forging a deal.

Just now the Greek government seems to prefer lobbing incendiary political gibes instead. The defence minister has threatened to flood Europe with migrants, including jihadists. The justice minister has demanded that Germany pay €160 billion ($170 billion) in war reparations and warned Greece might seize the buildings of the Goethe Institute and even German holiday homes if the money is not handed over (see article). And Mr Tsipras has brought forward to early April a trip to Moscow to see Russia’s president, Vladimir Putin. His hoped-for message is as clear as it is crude: Mr Putin might be only too happy to help a fellow Orthodox country that dislikes sanctions on Russia.